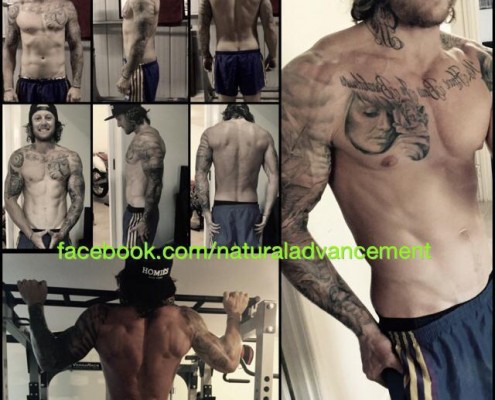 First of all I would like to say sorry ladies Tristan is taken haha. Tristan had done a little bit of weight training but didn’t really know where to start with structured training and nutrition. He’s a typical hard working tradie but also had the typical tradesman diet to go with it. Take away food, soft drinks, energy drinks etc. The bottom line is, that if you aren’t fuelling your body correctly your wasting most of your effort in the gym. So we set a goal, get shredded. A custom training and nutrition plan was mapped out for him to achieve this. I’m so impressed by the efforts he has made with his food prep, getting up early and prepping healthy meals and cutting out eating junk regularly. There is only 2.5kg difference in his photos, he’s 2.5kg lighter now and added some size to his arms also, which is great being in a deficit. His girlfriend Denica was a great support too! See her results that were shared last night. Here’s what Tristan had to say:

“3 months ago myself and my girlfriend decided we wanted to give one of these “12 week programs” a crack!

For myself I had little to no knowledge about food and what it does to you by just eating the day to day normal house hold foods that most of us eat.

So we hit Dean up about what he could do for us. The reason we had chose to go with Dean’s program is that we had been following what he had been doing with previous people and not only did we have progress photos to see for ourselves just what had changed but also he explained that the “scales” have a little say in what the results are at the end. So this had me thinking that this was interesting stuff!

I have never been an organised person let alone one to be organised with my food! It was a shock to the system but come the start of the second week things were already getting easier.

I was already feeling 100 times better from eating what Dean had set up for me to eat, getting out of bed in the early mornings was so much easier, more energy and just generally better all-round.

Along the 12week period I found that I was becoming more conscious of what I was eating, taking a good look at what I had decided to eat….. This was setting a really good pattern for the future.

The meal plans Dean had put together for us were really good, not once in the whole time did I find myself thinking “I’m starting to get sick of this stuff” it’s great stuff I have no problem to continue eating the same foods even now that the program is over.

Dean was a really great support throughout this program, tweaking things as time went to get the best possible results. I’m confident in saying that he knows his stuff and can help any person out with whatever it may be that they want to achieve.

The workouts that he had set for me may have 4 days a week but they weren’t long or mass amounts either, I had actually found myself thinking I had been punishing myself previously and getting nowhere with what I had been doing before I had started his program.

I have become the strongest and leanest I have ever been and it feels awesome.

I started this with the thought I had nothing to lose but much to learn and man haven’t I learnt a lot, it has been a real life changer and those changes have all been for the better.

I’d encourage anyone to give this a go as it’s a very valuable thing to learn, and if nothing else it’s worth it just to feel better.

I’d like to thank Dean for his help and knowledge throughout this program he has been great! Cheers mate.

I’d also like to thank my girlfriend Denica for all the times you helped me out when I got home from work late and had everything sorted for me. You made it that much more easier for me to stay on track.

I’m definitely going to do another one of Dean’s programs in the near future but with a different goal set.

Dean you’ll be running your own biggest loser show in no time hahaha! Thanks again.”